Coping With Anxiety Without the Help of Alcohol

I sincerely believed that alcohol would never be excluded from my life. Not because I couldn’t quit, but because I didn’t want to.

I never understood the ones who found joy without a sprinkle of liquid courage. I was convinced that being “addicted” to alcohol was in my nature and that changing that would be out of the question.

I never considered myself to be an alcoholic, but I knew all too well that I drank too much. I drank more than the people around me, – a lot more often. I preferred drinking alone but because I could function properly while drinking, I dismissed the reality that I had a drinking problem.

When I first made the decision to focus on my struggles with alcohol, my primary goal was to maintain my sobriety for a week. As a matter of fact, the overall goal was to focus on moderation.

However, regardless of my attempts to moderate, I quickly found myself struggling with wanting alcohol all the time. Physically, I was able to moderate, but mentally, I was a complete mess. I was unable to focus on anything else. I became irritable, emotional, and lazy. I ignored important chores and responsibilities unless I knew I was going to drink.

The first few months of my sobriety were far from easy. I was very emotional, confused, and exhausted. It would be a lie for me to say that I became the most productive individual. However, when alcohol was no longer a part of my routine, I became very enthusiastic about what I could achieve. Living a life without alcohol was something I genuinely did not believe I was able to attain.

Consuming alcohol allowed me to believe I was as confident as I could be. I became energetic, loud and motivated – but without it, my anxiety was out of control.

Suffering from severe anxiety and bouts of depression had always been a problem for me, but I was completely unaware that my drinking habits made my anxiety worse. I was uneducated on the dark reality that can arise from excessive drinking while struggling with mental health.

The realization that I was unable to cope with day-to-day stressors only came to light once I decided that I would no longer use alcohol as a stepping stone. It became very clear that I used it to suppress my emotions.

Depending on Yourself Rather than Alcohol

Since I decided to completely cut out alcohol from my life, I’ve worked hard on learning to cope with my anxiety in a much healthier manner. I won’t deny the fact that I still struggle from time to time, but I never ever regret my decision to stop drinking.

I am happier by nature. I am self-aware, I am focused, and I am able to enforce the boundaries I need to set to stay on track. In order to maintain my happiness, I need to maintain my sobriety.

I found that it is possible to be happier without alcohol, and there are better ways to deal with anxiety without the help of liquid courage. 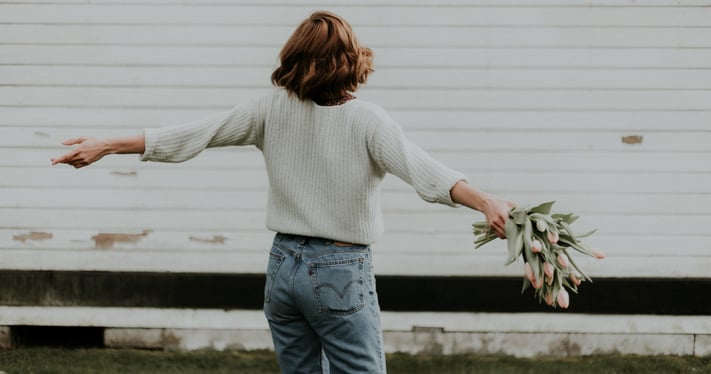 How I Got Help for Anxiety Without Alcohol

In the beginning, it became obvious that without alcohol, I had a difficult time coping with my emotions. It was crucial for me to remain motivated at maintaining my sobriety and my new lifestyle.

My new lifestyle consisted of the following three things:

I’ve always loved writing, but never used it to my advantage. I started to write in a journal when it became necessary that I track the symptoms of my anxiety. Sometimes I would only journal a few words at a time, not really making it obvious. That alone motivated me to keep going. Journaling helped me set and achieve goals, it allowed me to reflect on things I wouldn’t normally notice, and it helped enhance my sense of well-being. For me, a big part of journaling consists of writing down routines for myself. In order to keep myself busy, motivated and satisfied, I’ve had to stick to routines while allowing myself extra time for self care.

If there is anything I would say to someone who is genuinely looking for happiness, it is that they should read the books listed below. Reading these books have helped me interpret myself and the world more positively and have inspired me to learn more. They have encouraged me to become a better version of myself when I felt that, that alone, was impossible.

The Unexpected Joy of Being Sober by Catherine Gray

The Secret by Rhonda Byrne

There are so, so much more. I have only listed the ones I personally have read.

3. SURROUNDING YOURSELF WITH GOOD ENERGY

As Darren Hardy writes in The Compound Effect: “According to research by social psychologist Dr. David McClelland of Harvard, [the people you habitually associate with] determine as much as 95 percent of your success or failure in life.”

Take control of who you are surrounded by. Take pride in finding a community that follows a similar journey. Remember that you are in control now.

If you’re ready to reconsider your relationship with alcohol, and start living a fuller life without it, Aquila can help. Reach out to us, and we can help determine a recovery plan that is best suited for you.

Born and raised in Canada, Christine is a 28-year-old who found a deep love for writing when she struggled to quit drinking in 2020. At almost a year sober, she is passionate about sharing her experience in dealing with alcoholism and crippling anxiety. When she isn’t writing, you can find her chasing sunsets or relaxing at home with her husband and three-legged-dog. Follow her journey on Instagram @pathtosobriety and Twitter @cpathtosobriety.